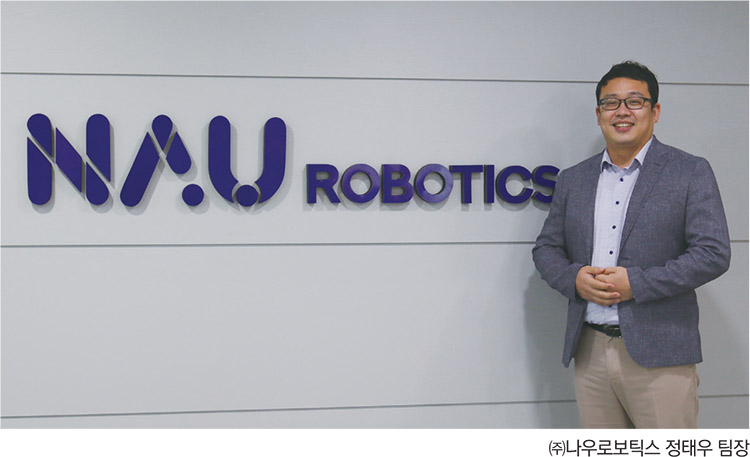 NAU Robotics is dreaming of becoming a young global robot maker with its accumulated capacity!

At a time when the 4th Industrial Revolution is drawing closer to us, a company which is bringing winds of change with ‘robots that can be easily used at any sites’ in the domestic manufacturing industry, including the plastic industry, is becoming a talking point.

It is NAU Robotics, a company which recently has made a rapid rise as a hidden champion of the robot industry by providing the best solutions for industrial robots, smart factories and software since its foundation in 2016.

A reporter of this paper met Jeong Tae-woo, a team leader at NAU Robotics who is considered a young and passionate entrepreneur with capabilities and experience accumulated as the competition in global manufacturing robot markets of nations like Europe, Japan and China is getting fiercer.

NAU Robotics established in November, 2016 took the first step by introducing an automation system in the plastic injection field, and then it has gradually expanded its business area through handling collaborative robots and robot systems as an agency of Hanwha Techwin and the sole Korean agency of COMAU Robotics.

The company recently has launched NURO X multi-axes robots to materialize the secondary automation of plastic injection, firing a new signal in the robot industry. NAU Robotics currently is pursuing its advance into the KOSDAQ market in 2023 and is paving the way for its development.

According to Jeong Tae-woo, a team leader at NAU Robotics, “All members of the company have continuously made the utmost efforts not to lose the vision of being a top robot maker, and the company currently is equipped with the internal capacity to enter the logistics robot industry and has prepared the concepts of software and hardware.”

He stressed, “We will combine experience and the youthful passion of veteran workers with careers spanning over two decades in the robot and automation industries to continuously introduce aesthetically customized robot products.” 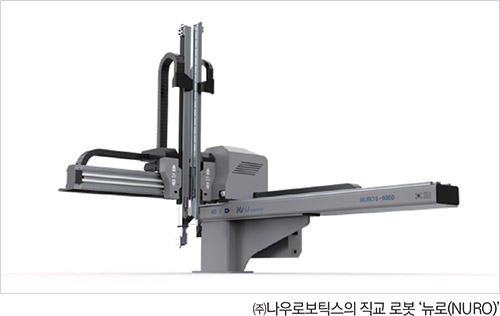 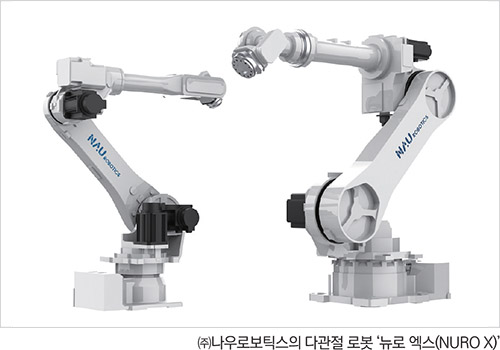 Cartesian robot NURO was produced to transfer the process of plastic injection molding to an easy and fast smart system based on factors such as being light weight, easy to program and being smart, to overcome the limitations of the existing Cartesian robots. These robots are lighter and slimmer compared to the existing robots, reflecting the limited space of injection sites. As a result, the difficulty regarding space problems experienced while installing robots has been minimized.

In addition, by establishing a separate programming system in connection with teaching pendants (NUTP-7) exclusively for NURO and providing the icon-shaped UI which is intuitive, obviating the existing difficult coding type, these robots are products designed in such a way that even beginners without high knowledge of robots can easily operate them with screens and buttons.

Jeong, a team leader, explains, “Regarding NURO equipped with a function by connecting direct programming immediately applicable without the support and request from the manufacturer and the MES solution, we removed the existing problem by correcting and applying programs through separate technological manpower and focused on enhancing the production efficiency of companies because actual users can swiftly cope with situations with ‘direct programming.’” In line with his explanation, the new products are also expected to lead to significant automation with their application to smart factories, the latest trend, and in manufacturing sites based on the novel idea that the deployment of robots in injection sites, which has been previously thought of as complicated and difficult, is ‘easy and fast.’

“Generally, in many cases, only the insert and take-out operations so far have been automated using cartesian robots in injection sites. As the injection procedure and structure of molds have been complicated, however, there have been limitations to improve the efficiency of production processes just by automating the primary operations to simply insert raw materials and take out products. However, efforts to establish processes linked to palletizing, such as cutting as part of additional processing operations after completing the take-out procedure in injection molding machines, loading and transporting, are increasing,” Jeong said. Accordingly, NAU Robotics has recently introduced economic NURO X to perform a wider range of automation tasks than cartesian robots because they can handle not only basic insert and take-out but also such secondary operations in order to overcome difficulties in injection sites which had focused automation on primary operations only; hence, the attention of industry has been piqued.

NURO X has been made as an ‘easy’ multi-axes robot by applying UI/UX programming developed by the research arm of the company. It is good in that users can easily apply the robots and they can quickly handle site requests, because the programming was developed based on an icon shape.

NURO X is currently being considered as a robot type to lead the smartization of the plastic injection industry with the existing cartesian robot NURO. As a robot to be easily used based on technology developed by the company, it is predicted to be a solution to most effectively cope with not only the take-out process but also the processing stage. 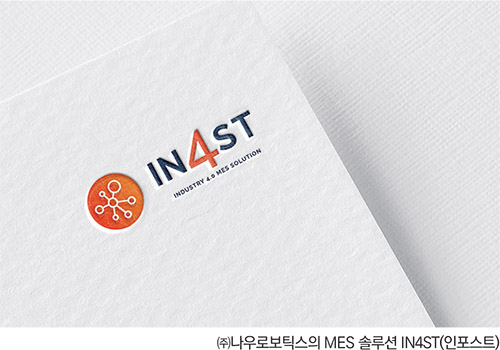 NAU Robotics, a company which has secured accumulated know-how in the fields of robots and automation, is expanding its focus to smart factories in order to optimize customers’ business with passion and a challenging spirit. The company has supported activities, such as operation schedules, operation instructions, quality management and operation performance totalization, at production sites of companies with the MES (manufacturing execution system) to provide management systems for effective management at production systems.

Jeong said, “At present, those new products are specialized in the automobile industry, but as mentioned above, NAU Robotics already has robot automation process technology and has a better understanding of the procedures of manufacturing. Therefore, our MES solutions are expected to be greatly helpful for establishing smart factories.”

One Step Further in Robot Industry with Self-Driving Logistics Robots

Jeong mentioned, “NAU Robotics currently has a plan to expand the business area to new fields while increasing the lineup of robots which is its main business,” adding, “We also are developing self-driving logistics robots with a goal of launching them in the second half of this year.”

The self-driving logistics robots which NAU Robotics is ambitiously preparing are products that are being developed with purely domestic technology. These robots are focused on convenient use and easy updating, and they can immediately handle problems when they occur. The company is going to introduce logistics robots which `can be easily managed and operated by anybody,’ which is a motto of the company, according to the manufacturing environment.

Since its establishment in 2016, NAU Robotics has been evaluated as an enterprise leading trends with continuous surpluses and stable operating profits in this field. In addition, the company already has been recognized for its technology. Regarding self-driving robots, which still are being prepared to be launched, the company has already signed prepayment contracts in anticipation for their excellence. 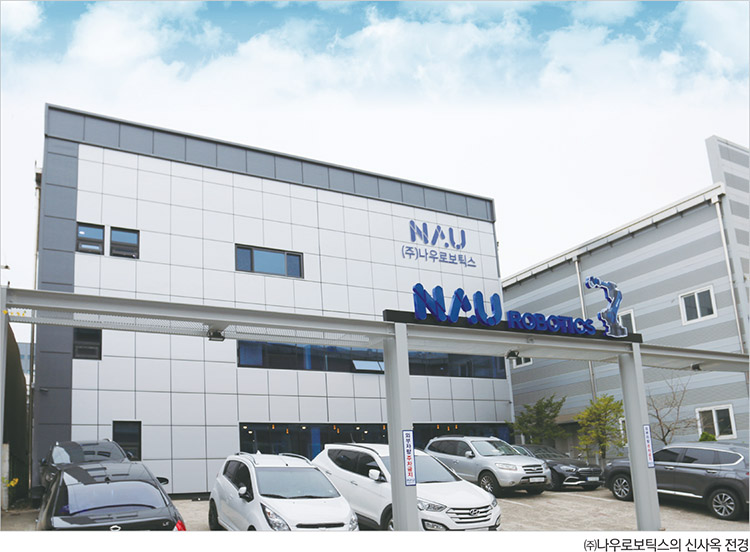 Toward the Global Market! NAU Robotics Realizing a Higher Ideal, Instead of Staying in the Nation

In mid-March, NAU Robotics moved to a new building which was about five times wider than the previous one to seriously establish a mass-production system following the launching of new robots and cope with the expansion of manpower. The company has made the utmost efforts to realize a higher ideal at the new building located in 449beon-gil 42 Aenggogae-ro, Namdong-gu, Incheon (Block 89 Lot 9 of Namdong Industrial Complex).

With the relocation to the new building consisting of two buildings, the company, as mentioned above, was be able to establish a system to mass-produce robots and secure an ability to product robots more quickly and efficiently.

In addition, by enlarging the size, the company has focused on improving production efficiency and responding to customers faster through horizontal and smooth communication. The company also established a large meeting room on each floor to help departments smoothly prepare plans and share information. 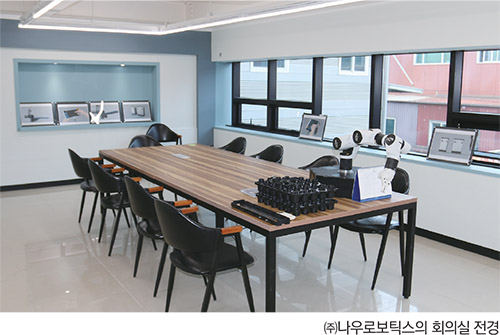 Team leader Jeong stated, “With the relocation to the new building, NAU Robotics now has a faster and more efficient production system. Accordingly, the company is planning to set up various goals to be reborn as a global enterprise by expanding its business area, including logistics robots, as well as the existing businesses.” He expressed a strong determination by adding, “Based on technology possessed by the company and our inherent capacity, the company wants to be a globally proud robot maker beginning from achieving sales of 1% in the robot category abroad.”

NAU Robotics is pursuing attempts to export products to the U.S.A. and Thailand, and it has a plan to expand exports to North American markets, including Mexico and the U.S.A., East European markets and Southeast Asian markets from this year.

The company expressed an ambitious determination to play a role in the global market based on differentiated technology. Their moves to grow into a global champion from a hidden champion are being watched with keen interest.