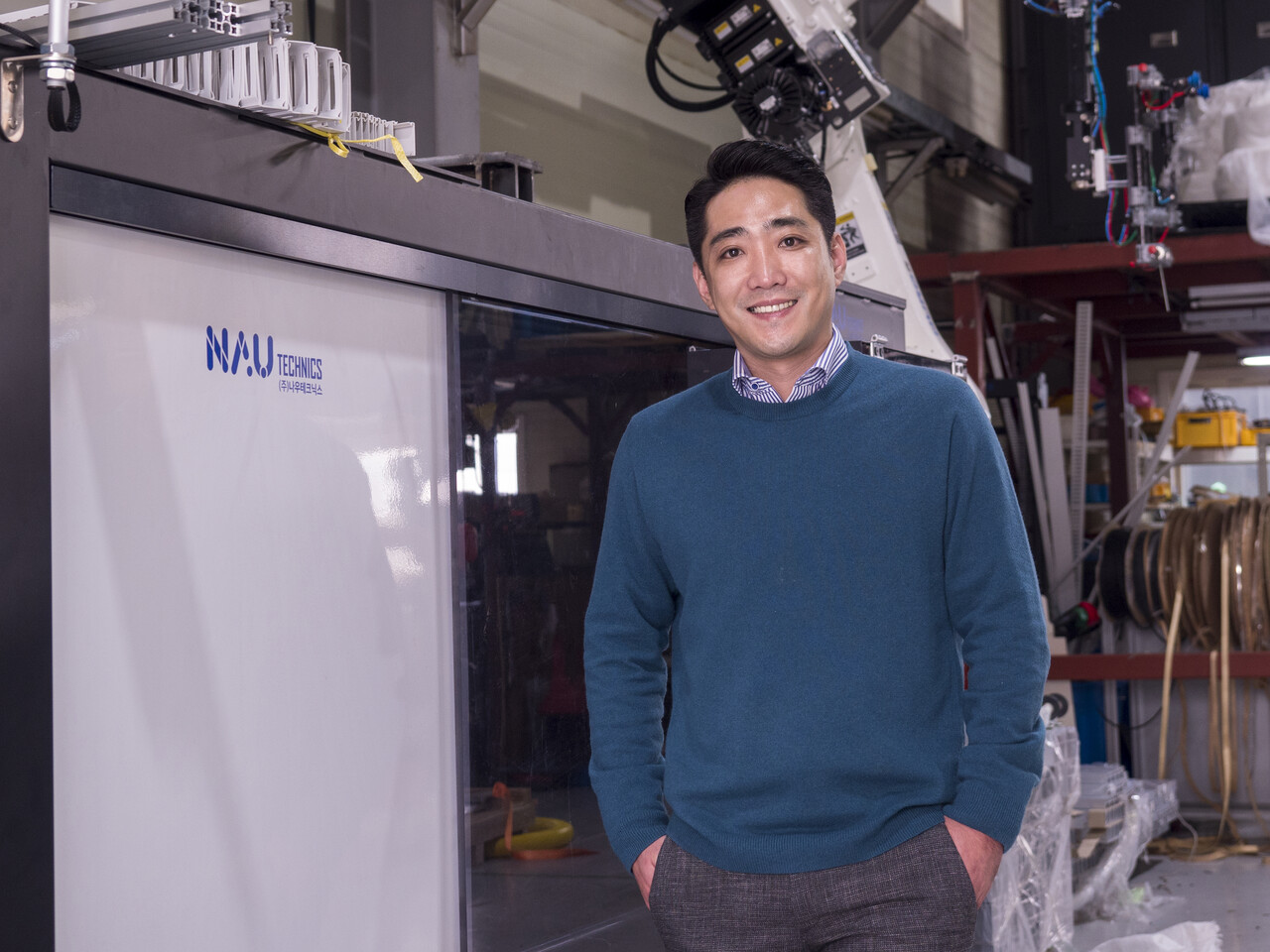 As the non-face-to-face economy has expanded across the entire society since the COVID-19 pandemic, a wind of fundamental change has been blowing in the manufacturing industry. As development of core technologies of the 4th Industrial Revolution era, such as IoT, big data, self-driving, cloud computing and AI, has accelerated, competition surrounding the robot industry, which is emerging as a battleground of technological competition is getting fiercer.

In circumstances where major robot technology enterprises in regions, including Europe and Japan, are occupying over 50% of the global robot manufacturing market, Chinese robot makers have been attacking the global market more fiercely. As the e-commerce market experienced rapid growth due to the influence of the corona pandemic last year, the market has been getting hotter combined with the merger and acquisition fever in the worldwide logistics robot industry.

Amid such a trend, the emergence of domestic robot makers is dramatically increasing. It is true in the domestic industrial sites that robots have been operated mainly for manufacturing sites of large enterprises, such as automobiles and household appliances, due to high maintenance costs and a prejudice that ‘robots can be easily used by experts only.’ With the appearance of robots which even beginners can easily use in the nation, small and mid-sized manufacturers also have high expectations for the introduction of robots. NAU Robotics is one of the companies which are shaking up the domestic manufacturing industry under the banner of ‘easy-to-use robots’ which can be immediately applied to any sites.

NAU Robotics, founded in 2016, has established smart
factories, including industrial robots, and provided the best software
solutions, attracting attention as an emerging superpower of the robot
industry. About 75% of 35 executives and employees of the robot maker are
talented people who have accumulated rich experience and know-how in the robot
field for over 10 years. As such, the company owns almost the largest number of
references related to robot systems in the industry.

NAU Robotics supplemented weak points of the existing
multi-joint robots which were difficult to operate and professional engineers
only could use, making innovative change so that anybody could easily and
simply operate those user interface (UI)-based robots. The company has
strengthened competitiveness by completely internalizing core technology for
robots by precisely controlling motions and minimizing vibration and noise with
Linux and Ethernet technology-based robot motion control technology.

Based on such technologies, the company has launched the
multi-joint robot NURO X series and the high-speed precision 4-axis Scara robot
‘NUCA’ series, as well as the NC-type handling cartesian take-out robot ‘NURO’ series used at
plastic injection sites. This year, the company is especially going to expand
its business area to the rapidly growing logistics robot field through
releasing the self-driving logistics robot ‘NUGO’ series. The internalization
technology of NAU Robotics, and experience and know-how accumulated in the
process of providing robots and automation solutions in diverse industrial
sites are infused in these products.

NC-type handling Cartesian robot NURO recently launched by NAU Robotics has attracted attention from the injection molding industry. The NURO series were produced to transfer injection molding processes to smart systems more quickly and easily based on three concepts of light weight, programming and smart, in order to overcome the limitations of the existing cartesian robots.

First of all, a big advantage of the NURO robots is that they are made in a lighter and slimmer form compared to the existing robots and the space problem which people commonly experience while installing robots in narrow injection molding sites has been minimized. Even field workers lacking expertise in robots can use them through easily operating them with screen buttons. The NURO series, for which a separate programming system was established in connection with teaching pendants (NUTP-7) exclusively for NURO, significantly improved convenience to materialize intuitive use by providing an icon-shaped UI, breaking away from the existing difficult coding system. 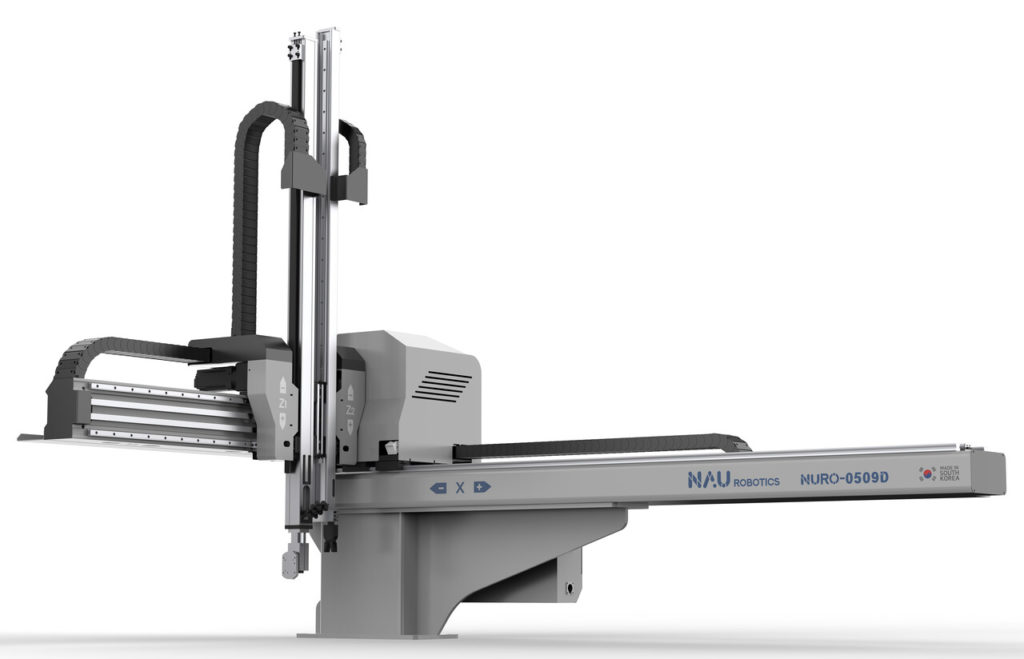 Besides, they have a function to link direct programming which is applicable without support from the manufacturer and MES solutions. As the existing robots need a process to correct and apply programs through separate technicians, it was difficult to immediately put them into operation processes. On the other hand, the NURO series, for which direct programming was adopted, can swiftly respond without additional working stages and can play a big role in improving production efficiency at manufacturing sites.

CEO Lee Jong-ju of NAU Robotics said, “The existing take-out robots need separate control programs, so they can be considered as taking-out machines, instead of robots,” adding, “The NURO series equipped with programs exclusively for robots can be easily operated and easily connected with automation systems. The NURO series, in particular, based on multi-axes robot control technology are remarkable in system compatibility.”

Lee defines the take-out robots as handling robots. In the case of large tonnage, robots are made in the multi-joint system rather than orthogonal system. Different from general-purpose multi-joint robots made by global enterprises, robots of NAU Robotics which are specialized multi-joint robots can be applied to extraction. The actual take-out robot series NURO and the multi-axes robot series NURO X use the same controllers. 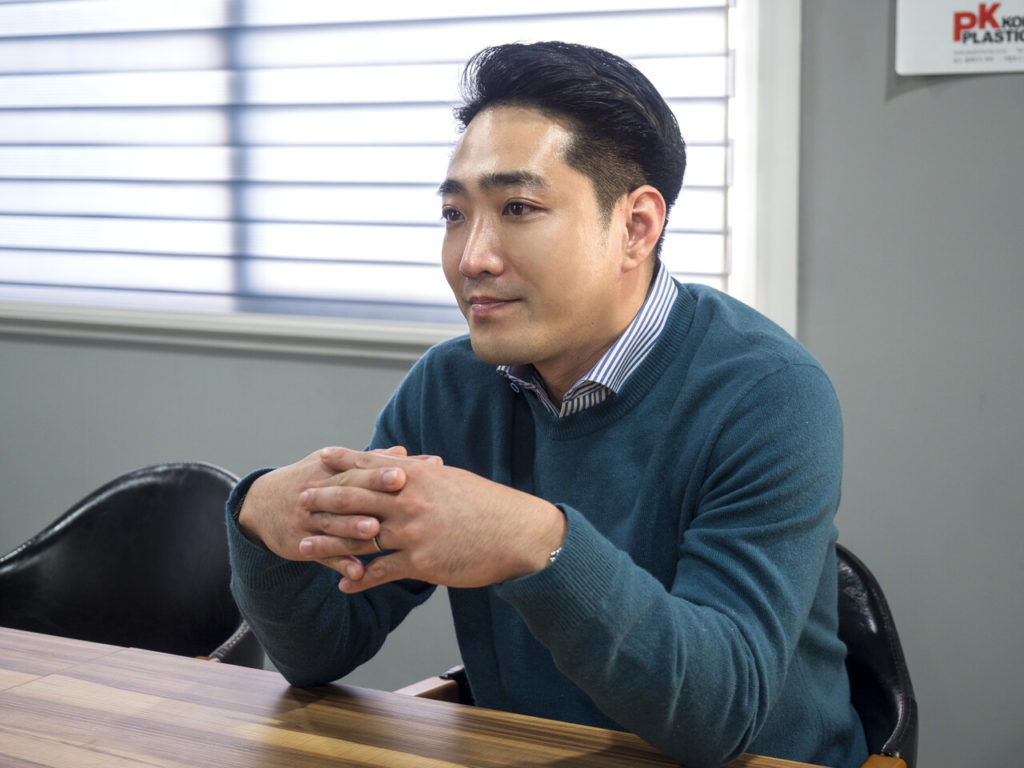 NAU Robotics is working hard on industry-academy cooperation to develop next-generation robot technology. In June last year, the company signed an agreement with the Prof. Oh Se-hun team of the department of robot engineering at Daegu Gyeongbuk Institute of Science & Technology for developing robot actuators and control equipment, in order to apply robot-related technology to industrial robots.

Prof. Oh, after finishing the doctor’s course at the University of Tokyo, Department of Electric Engineering in Japan, developed electric cars and precision servo control algorithms and module-type elastic actuators regarding robots. The robot expert is conducting applied research to apply his findings to service and industrial robots. NAU Robotics has been concentrating its efforts on development of industrial robots and localization of core robot parts through technological cooperation with Prof. Oh’s team.

The company also is working hard on industry-university cooperation to cultivate excellent manpower in the robot field. In October last year, the company signed a cooperation agreement with Youngsan University to establish the industrial robots major in the school. The curriculum includes theoretical classes and field practice, expected to play an important role for educating human resources which can immediately be put into the field through education focused on practical business.

NAU Robotics, in order to educate manpower specialized in the robot industry, provides various opportunities for field training and is seeking out employee students with high grades every year. The curriculum connected with employment is anticipated to be greatly helpful for job creation for the youth.

Previously, NAU Robotics had actively recruited manpower specialized in the robot field and operated ‘a project to systematize learning’ so that new workers could adapt to the organization by rapidly acquiring knowledge of robots. Recognized for such continuous efforts, NAU Robotics was selected by Incheon as an excellent SME for job creation and could put its name on the Ministry of Employment & Labor list of small but strong enterprises. 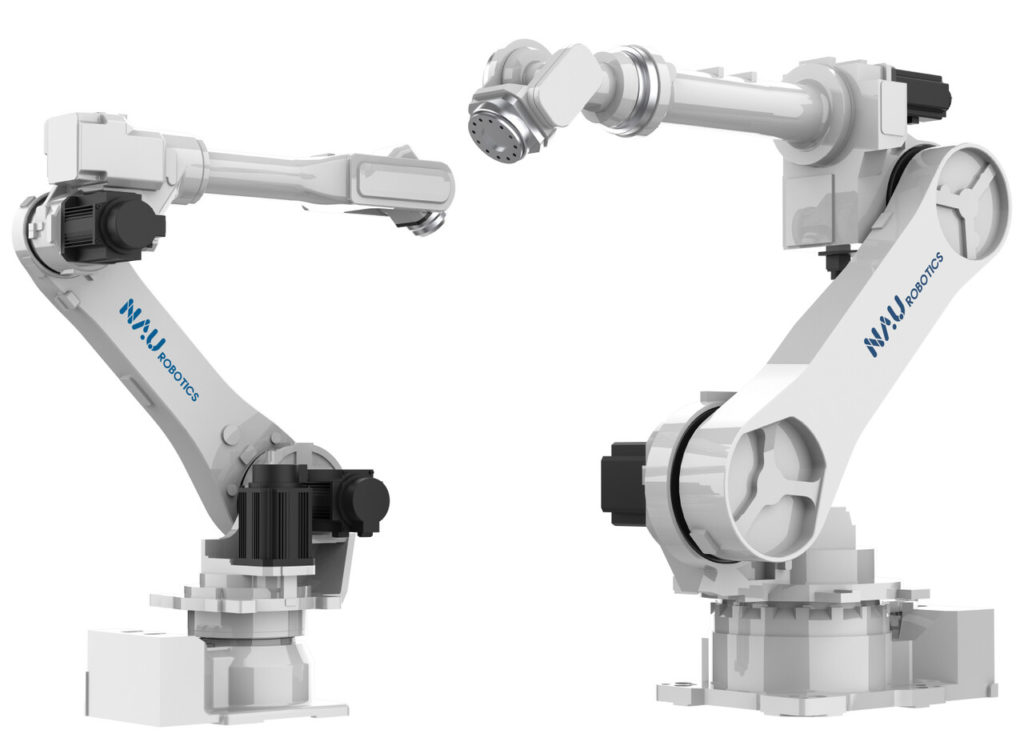 NAU Robotics has provided services not only to solve the chronic problems of lack of manpower and high costs, but has also sought to improve productivity based on rich experience in robot design by industry and by process using multi-axes robots and collaborative robots as well as factory automation design. The company currently is actively responding to business opportunities to establish smart factories based on MES solution IN4ST developed by it.

NAU Robotics has been providing consistent total solutions of automation systems, robots and MES to companies which want to apply smart factories. Through it, companies which have introduced smart manufacturing systems currently can control processes at production sites through customized systems at reasonable costs.

NAU Robotics relocated its office building to a larger one to establish a mass-production system and expand its workers following the launching of new robots in mid-March. The building site was newly created at 449beon-gil 42, Aenggogae-ro, Namdong-gu, Incheon (Block 89, Lot 9 of Namdong Industrial Complex), and the new office with two buildings is about five times wider than the previous one.

The office expansion was aimed at improving the production efficiency and enabling faster responses to customers by establishing horizontal and smooth communication among teams. In addition, a large meeting room was built on each floor in order to enable not only planning preparation and information sharing among departments, but also on- and offline meetings according to the Corona era.

The factory building is mainly formed with production lines to mass-produce the take-out robot NURO series, Scara robots, multi-axes robots, self-driving logistics robots and automation equipment. The three-story office building has departments for purchasing and production, a cafeteria and a reception room on the 1st floor, and a research institute on the 2nd floor. The 3rd floor with the CEO office is used as a space for various offices, such as the sales marketing team and management team.

NAU Robotics, a company which has established a robot mass-production system since the relocation of its office building, plans to release self-driving logistics robots as a new project, diversify robot lineups and continuously expand the existing business area.

CEO Lee said, “The company relocated its headquarters in order to establish a faster and more efficient production system, as the size of manpower greatly increased and the robot lineup was completed after the company steadily recorded surpluses for the past four years.” “At the new building, the company will execute various strategies to be reborn as a global robotics company in addition to conducting its existing businesses,” added Lee. 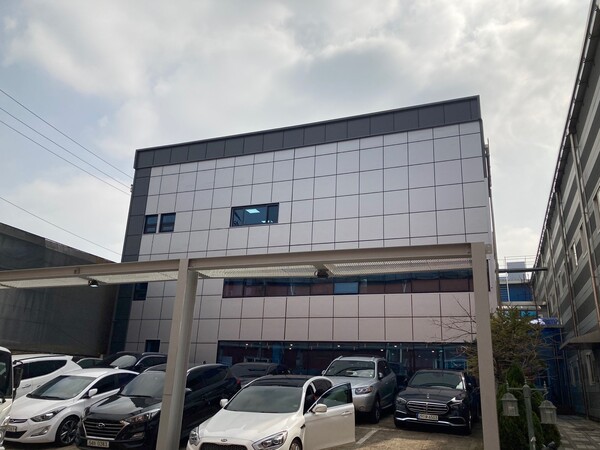 CEO Lee said, “The company relocated its headquarters inorder to establish a faster and more efficient production system, as the sizeof manpower greatly increased and the robot lineup was completed after thecompany steadily recorded surpluses for the past four years.” “At the newbuilding, the company will execute various strategies to be reborn as a globalrobotics company in addition to conducting its existing businesses,” added Lee. 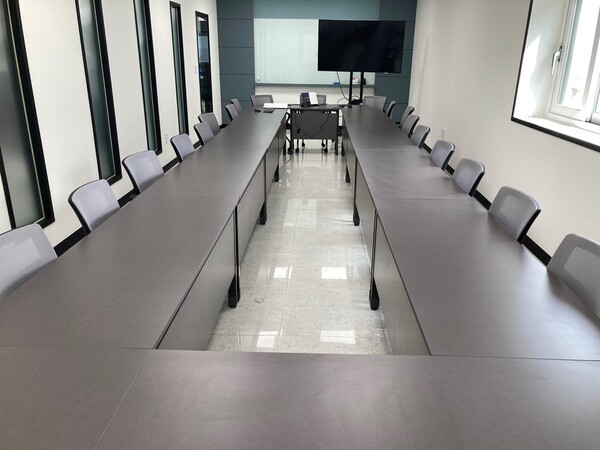 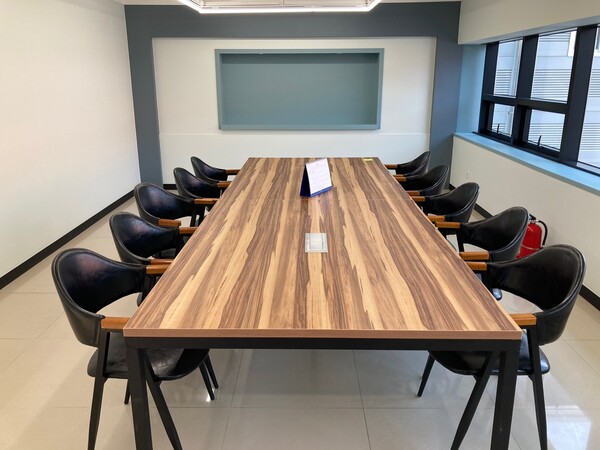 Journey Towards a Global Enterprise

Most of robot makers have stayed at the stage of developing products and launching prototypes in the form of venture businesses, but it is worth noting that NAU Robotics has been steadily recording surpluses and stable operating profits since its foundation. The company signed a pre-payment contract for the self-driving logistics robot ‘NUGO’ series, which is still in preparation to be released. This signifies recognition for its quality.

NAU Robotics has made rapid growth with a sharp rise in annual sales. Based on such performance, the company determined to proceed with an IPO last year, and chose Hi Investment & Securities as a host company and is working on the procedure with a goal to be listed on the KOSDAQ.

With a plan to be listed on the stock market, NAU Robotics is smoothly moving towards its goal of achieving a global market share of 3% within five years. The spreading 4th Industrial Revolution and non-face-to-face economy are driving demand for robots in all industrial sectors, creating positive prospects for growth in the worldwide robot market.

NAU Robotics, which is currently exporting products to the United States and Thailand, plans to expand export to North American markets, including Mexico and the U.S., the East European markets and Southeast Asian markets.

Lee mentioned, “More Korean robot technology enterprises should be created and grow to the global size,” adding that NAU Robotics would take a role in the global market based on its differentiated technology.